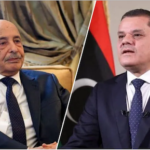 Prime Minister refuses to appear before HoR for questioning

Prime Minister of the Libyan Government of National Unity (GNU), Abdel Hamid Dbeibeh, expressed his astonishment at the House of Representatives’ (HoR) invitation to him to appear before the House in a questioning session before approving the budget, stressing his intention to be outside the country on a mission he did not disclose, in conjunction with the upcoming questioning session on Monday.

This came in a meeting between Dbeibeh and a number of HoR members, in the presence of the Head of the Presidential Council in Tripoli, in which the Prime Minister affirmed his respect for the House and his readiness to attend its sessions held anywhere in Libya.

Dbeibeh revealed at the same time an upcoming press conference that will be held to announce an economic rescue package to support projects, in partnership with the Central Bank of Libya (CBL), in a clear indication that he is moving forward with financial arrangements, after failing to pass the budget.

It is worth mentioning that the Speaker of HoR, Aqila Saleh, had said if GNU does not attend the session that HoR will hold for questioning it, the House will withdraw confidence from it.

Some Libyan political blocs had called on the Libyan Political Dialogue Forum (LPDF) commission to change GNU, and 28 HoR members demanded confidence withdrawal from the Government.

Some HoR members had already casted doubt over GNU attending the parliamentary questioning.