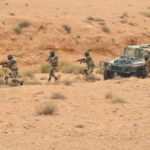 Tunisian Defense Ministry announced the capture of 52 Syrians, in two groups, trying to cross the border from Libya to Tunisia.

The military units operating in the Ramada sector managed to arrest 25 Syrians, including a woman, in Martiba region at dawn on Monday, the Ministry said in a statement.

In another operation on Tuesday, they arrested 27 other Syrians, including 4 women and 11 children, it added.

They were moving within the border zone with the intention of sneaking across the border into Tunisia, it pointed out.

They were handed over to the Border Guard units in the region to take legal measures in their regard, the Ministry said.