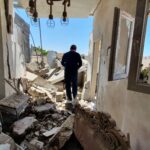 Libya’s Public Prosecution is investigating the embezzlement of state funds by the former mayor of Tripoli, the Attorney-General’s  office announced on Saturday.

The embezzled money, which amounts to 549,000 Libyan Dinars ($118,04), were dedicated for internally displaced people in southern Tripoli.

During the investigating process, the Public Prosecution was able to recover a portion of the money, and the former mayor was arrested and detained pending trial.