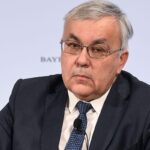 Russia’s Deputy Foreign Minister, Sergey Vershinin, held consultations with the UN Secretary General’s Special Envoy for Libya, Ján Kubiš, last Friday in Geneva to discuss the situation in Libya, according to a statement released yesterday by the Russian foreign ministry.

Both diplomats discussed in detail “the current state of affairs in the Libyan settlement process and the tasks for the coming period, including holding elections and maintaining stability on the ground”, reads the statement of the Russian ministry.