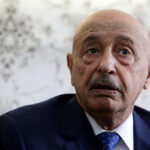 Parliament Speaker Aguila Saleh said that delaying the departure of the Parliament’s plane from Tripoli’s Mitiga Airport for 6 hours was a “deliberate act.”

Saleh added that he was “surprised” when Mitiga Airport informed the control tower at Tobruk Airport that the Parliament’s plane was prevented from taking off on Sunday, on the pretext that there was no enough space for the plane.

The Speaker called on the Attorney General and the competent authorities to open an investigation into the incident.