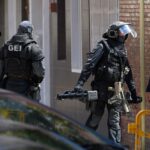 Spanish authorities revealed on Thursday the dismantling of a network of companies that served to finance a militia linked to  ISIS in Libya, which operated in Catalonia and the Valencian Community during early February, according to a report by Spanish news website El Confidencial Autonómico.

The Spanish Interior Ministry told El Confidencial Autonómico that, after the initial investigations, the police agents verified that a person had a business structure which operated in several countries, including Spain, diverted funds to Libya to finance the militia that operates under the direction of ISIS.

Police in Barcelona, ​​Gerona and Valencia arrested three Libyan nationals in connection to the network as part of an investigation that began two years ago, according to the Spanish website.

The arrested individuals have settled in Spain, at least temporarily, after receiving medical treatment as individuals wounded in the war in Libya, within the framework of a program solidarity and in Spanish hospitals.

After settling in Spain, those individuals controlled several commercial companies with which carried out commercial operations with Turkey, Tunisia, Libya and other countries “with payments for opaque transfers and with movements of money,” according to El Confidencial Autonómico.

The members of this militia were all from the same Libyan city of Zawiya , which is close to the capital, Tripoli, and the border with Tunisia.