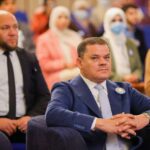 At least three members Dbeibeh’s cabinet have resigned so far. These are, in particular, the Minister of Civil Service Abdel Fattah Khoja, the Minister of State for Immigration, Jadid Maatouq, and the Undersecretary of Finance for Institutional Affairs, Ali Taboni.

These resignations come as Prime Minister Fathi Bashagha, newly-elected by parliament, vouched to move to the capital in order to assume office.