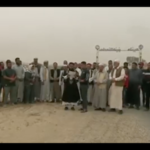 Tribal and social factions announced on Saturday shut down of the El Feel oil field in Ubari, Fezzan, suspending oil and gas production, in addition to exports from the Zueitina oil port in Eastern Libya.

On Thursday, the Finance Ministry of the outgoing government of Abdul Hamid Dbeibeh announced the transfer of $6 billion to the ministry’s account at CBL, from oil revenues.

Planning and Finance Minister of the new Libyan government, Osama Hammad, described the National Oil Corporation’s transfer of $6 billion to the account of the Finance Ministry of Dbeibeh’s government at the Central Bank of Libya (CBL) as a violation of the law and all instructions issued by the competent authorities in this regard.

Hammad said that this act will result in distortions in the national economy, and that it is better for these institutions to distance themselves from using their position in political conflicts or using them in order to achieve gains for a political party.

He added that the Ministry of Planning and Finance stresses the need to establish the principle of accountability for anyone who had committed a crime that would harm public money and advocate the rule of law.

He said, “We assure all the state’s supervisory and judicial agencies, represented by the Attorney General, the head of the Administrative Control Authority, the head of the Audit Bureau and the Anti-Corruption Authority, to stop these actions because of the seriousness of this procedure and consider it a clear infringement on public money.”

The Minister of Finance called for the necessity of confronting these acts, punishing their perpetrators, and taking all necessary legal measures in this regard in order to preserve the wealth of the Libyans, and to ensure the continuation of building the state that seeks to achieve stability and embark on the stage of construction and reconstruction to achieve better results.