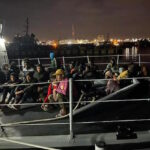 Tripoli Coast Guard intercept 61 migrants on their way to Europe

The Tripoli-based Coast Guard intercepted on Saturday 61 migrants of several African and Arab nationalities who were on their way to European shores on a rubber boat.

The Guard received a distress call, after which it moved to the west of Tripoli, where it intercepted the migrants, according to a statement by the Protocol and Information Office of the Tripoli-based Naval Forces.

The migrants were disembarked at the Tripoli Naval Base and then transferred to the Anti-Illegal Migration Agency, which will follow up on the procedures for the migrants’ deportation to their countries, according to the statement.

0 0
Previous : Kamala Harris: US committed to working diplomatically to promote stability and democracy in Libya
Next : US ambassador: There will be no tolerance with those seeking to obstruct Libya elections