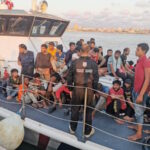 Tripoli Coast Guard has intercepted 330 migrants on board two boats at sea on their way to Europe.

On one of its operations, “the Guard rescued 214 migrants, including 11 women and 4 children of Arab and African nationalities,” Interior Ministry said in a statement on Wednesday.

“It also rescued 116 migrants of different nationalities on another boat,” according to the Ministry’s statement.

The migrants were transferred to the disembarkation point at the Port of Tripoli, in the presence of representatives of the International Organization for Migration (IOM), and were handed over to the Anti-Illegal Migration Agency, it added.