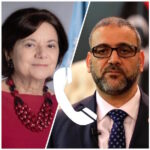 President of the Tripoli-based High Council of State (HCS), Khaled al-Mishri, has discussed with the UN Under-Secretary-General for Political and Peace-building Affairs, Rosemary DiCarlo, the political developments in Libya.

This came during a phone call he received on Tuesday, said HCS Information Office on Wednesday.