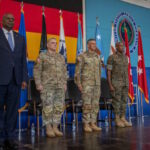 Date: Tuesday, August 9, 2022
168 Views
With the change of command at AFRICOM, the U.S. Embassy to Libya welcomed General Langley and extended its gratitude to General Townsend “for his contributions to supporting stability and promoting security in Libya,” said US ambassador, Richard Norland.

“Today also marks the 82nd anniversary of the Libyan Army, a day to note the important role of Libyans in military uniform committed to serving the people of Libya,” according to US Embassy.

“Accordingly, the Embassy and AFRICOM look forward to supporting continued Libyan-led progress to reunify Libya’s military, including the efforts of Generals Haddad and Nadhuri, and the JMC (5+5).”U.S.

“It is truly an honor to stand before you as the new AFRICOM commander,” Langley said at the ceremony.

“I look forward to taking on the mantle of leading these talented professionals here at AFRICOM and across our components as we work shoulder-to-shoulder with our allies and partners to advance peace and prosperity for both Africa and the American homeland.”

Langley becomes the sixth U.S. Africa Command commander since the command was established in 2008, according to the Command.

0 0
Previous : 116 migrants disembarked back on Libyan shores in a week – IOM
Next : Tripoli Coast Guard intercepts 330 migrants on way to Europe.