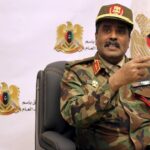 There is a connection between religious extremists based in Libya and those in Tunisia with the latter receiving training inside Libyan territories, said Ahmed Al-Mesmari, the spokesman of the Libyan National Army (LNA).

The LNA spokesman accused the Tunisia-based Muslim Brotherhood of controlling Ramada military base, 30 km from the Dhiba Wazen border-crossing. He also said that Libyan terrorists are being used to carry out attacks inside both Libya and Tunisia.