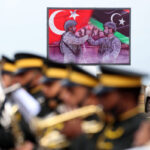 Armed groups loyal to Abdul Hamid Dbeibeh have 12 hours to leave Tripoli’s International Airport as per the orders of the Turkish military mission present in the capital, a source close to the leader of the Turkish mission tells The Libya Update.

The source, which requested anonymity for safety concerns, said that the mission’s leader Osman Aytac was gravely alarmed by the armed groups’ decision to go to the airport where Turkish troops and Ankara-back Syrian mercenaries have been present for a long time.

According to the source, Aytac’s views the armed groups’ presence at the old airport as “very dangerous” and “threatening” for the Turkish and Syrian fighters.