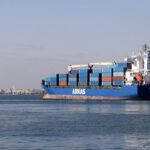 The movement of the 444 militia south of Misrata to Bani Walid on Friday took place after the Turkish container ship MATILDE A docked at the Port of Misrata on Wednesday around 1:30 pm, which continued unloading its cargo until Friday, according to the Libyan Silphium Foundation for Studies and Research.

The ship MATLILDE A refused to be inspected by EU Operation IRINI in the Mediterranean, and two days after its arrival in Misrata, 444 militia moved south to Bani Walid.

The Silphium Foundation said it would publish a report of the types of weapons that appeared in the photos of Militia 444 convoy.