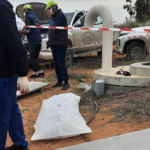 Interior Ministry said in a statement Sunday that it had received a report from the Souq al-Khamis Imseihil Public Prosecution, about the possibility of human remains existence inside the water connection room, confirming that teams of the Investigation Department headed to the site, where they confirmed the report in the presence of the Prosecution.

The Ministry pointed out that two unidentified bodies were recovered from the room, noting that work was continuing on the remaining reports received.

0 0
Previous : Former French Defense Minister: Our army’s mistakes in Mali started from Libya
Next : GNU to launch first phase of housing initiative for youth and families in need