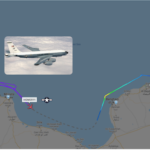 U.S. Air Force made on Monday a surveillance mission off the Libyan coast with Boeing aircraft departing from Crete island, according to military flights tracking website.

“The aircraft departed Crete southbound made a very low flight off Benghazi (below 1.000ft!) before continuing his mission on the Gulf of Sirte and then to the west off the coast of Tripoli,” it pointed out.

“Here, too, the aircraft has again moved to a rather low (and unusual) altitude, making several orbits in front of the western Libyan coast,” ItaMilRadar added.

“It should be noted that in those minutes a Turkish Airbus A400M was also heading towards Libya, engaged in the usual airlift between Turkey and Libya.”

“The RC-135U Combat Sent is designed to collect technical intelligence on adversary radar emitter systems,” according to the Website.