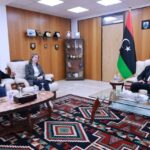 UK tells Presidential Council elections must be held on time

According to a statement by the council, al-Lafi also affirmed “the continued commitment of the Presidential Council to conduct the elections on time, in implementation of the outcomes of the political agreement, and the aspirations of the Libyan people.”

This notably comes after emerged reports of the council’s chairman Mohamed al-Menfi and al-Lafi are planning to introduce a new elections timeline, which would delay the second round the presidential elections until March 2022.

Mussa Al-Koni, a member of the council, implicitly confirmed these reports, as he took to Twitter to publicly distance himself from the proposal.