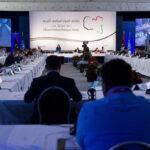 UN Advisor, LPDF Committee meeting postponed due to refusal of corruption in the Committee

Date: Sunday, December 26, 2021
53 Views
A meeting between the UN Special Advisor on Libya, Stephanie Williams, and the Committee of the Libyan Political Dialogue Forum (LPDF) was postponed today due to the refusal of the political forces and many of LPDF members to keep the Committee as it is today after corruption spread among its members, according to Libya Update source.
Many of the Committee members obtained major governmental positions through decrees issued by Prime Minister Abdul Hamid Dbeibeh and President of the Presidency Council Mohamed al-Menfi.

Many were appointed as ambassadors, which is a kind of bribery and corruption, and the Committee no longer represents the political forces on the ground after it witnessed such corruption cases.