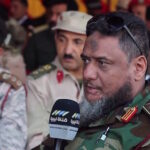 This came in a letter directed by Al-Mansoori, who is also head of the Joint Security Room, to the security rooms in Sabha, in which he asked them to stop the work of the rooms and freeze it until further notice.

0 0
Previous : UN Advisor, LPDF Committee meeting postponed due to refusal of corruption in the Committee
Next : The Guardian: UK ambassador to Libya accused of violating diplomatic norms and interference