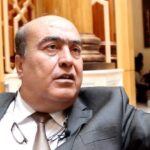 Members of Libya’s House of Representatives and the High National Election Commission (HNEC) will hold a UN-sponosred meeting tomorrow in Italy preparing the parliamentary and presidential elections law, said Miftah Koueider, a member of parliament.

Koueider told press reporters on Saturday that the HNEC would present its proposed bill during the meeting, after which, members of parliament would discuss it and decide whether to approve it or not.