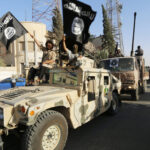 Two leaders of the terrorist group ISIS were killed by the French military in Mali, as part of its anti-insurgent operation called ‘Operation Barkhane’.

The office of Florence Parly, French Minister of the Armed Forces, released a statement in which it was announced that Issa al-Sahrawi, the logistical and financial coordinator of ISIS in the Sahara region, and Abu Abdul Rahman al-Sahrawi, an ISIS commander, were both killed on Wednesday.

The operation had taken place overnight in the Menaka region in co-ordination with the U.S. army, the statement said.

“This latest operation highlights our determination to continue the fight against armed terrorist organizations, working alongside our partners in the Sahel, and in co-ordination with our European and American allies,” it said.