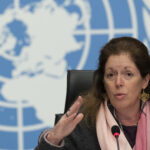 Stephanie Williams, the U.N. Advisor on Libya, said she wanted the talks between members of the House of Representatives and High State Council, to take place before Ramadan, which is expected to start on April 1.

This comes after Williams’ announcement last week that she intends to convene a joint committee with six members each from the House and the Council in order to agree on a legal framework for the elections.

“We need to get these talks going prior to the month of Ramadan. We’ve set aside two weeks to establish the constitutional basis. We can hopefully also in that period work on the electoral law,” she told Reuters in an interview on Wednesday. “That will allow us to put the country on a footing for elections.”

The two chambers should each submit six names to join the committee “in the next few days”, Williams said.