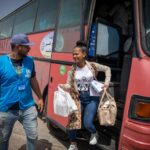 103 migrants, including women and children, have been evacuated from Libya to Rwanda on Thursday night, announced the U.N. High Commissioner for Refugees (UNHCR) on Friday.

In a statement via its Facebook page, UNHCR Mission in Libya explained that, in addition to women and children, the group included “survivors of violence” and most of whom “had been living in urban areas.”

“In Rwanda, they will receive support from UNHCR at the Emergency Transit Mechanism centre in Gashora, while further solutions are sought for them, including resettlement,” said the U.N. agency.

“Evacuation flights are life-saving but we only have very limited places,” it said. “UNHCR continues to urge countries to provide more legal pathways to help some of the most vulnerable people reach safety out of Libya.”

“Many people were involved, helping to make these lifesaving flights possible,” UNHCR said in brief statement via Twitter.

Many people were involved, helping to make these lifesaving flights possible