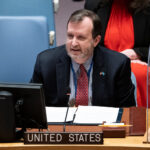 The United States expressed dismay over “appalling” schemes by Libyan politicians to determine who will be in power, Richard Mills, Deputy U.S. Representative to the U.N., told the Security Council on Monday.

“It is appalling that small cabals of men, in most cases backed by weapons rather than popular legitimacy, have spent the last six months cutting deals and crafting schemes to determine who will be in power, and who will get which spoils – while some three million Libyans are still waiting to exercise their right to vote for Libya’s leaders,” he said.

“Libya has reached a critical moment and its leaders must choose a trajectory – whether to build consensus and foster unity that can lead to free and fair elections and stability or to wallow in the status quo and consign the Libyan people to uncertainty, stagnation, and potential violence,” added the American diplomat.

Mills underscored that “pronouncing that the Libyan Political Dialogue Forum roadmap has expired does not in any way change the facts on the ground in Libya or break the political impasse.”

“It in fact increases uncertainty and the potential for violence. It is also a distraction – Libyan leaders for too long have given excuses and sought to delay elections in order to extend their time in power,” he explained. “A new fight over leadership will only delay elections further and prolong the instability.”

Mills call on the Council to provide the U.N. Support Mission in Libya (UNSMIL) with a “clear and comprehensive one-year mandate so the Mission can work confidently to address the many issues facing Libya.”

“UNSMIL needs this Council’s backing if it is to be most effective, and a substantive mandate renewal for a full year is the best way to convey that support,” he concluded.

0 0
Previous : IOM: 480 migrants disembarked back on Libyan shores in a week
Next : Norland, Dbeibeh discuss management of Libya’s oil revenues