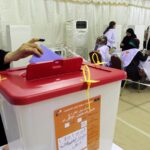 US, Europe ready to punish those who seek to undermine elections with violence

France, Germany, Italy, the UK, and the U.S. “stand ready to hold to account those who threaten the stability or undermine the political and electoral process in Libya, through violence, or the incitement of violence,” according to a joint statement released Friday by the five countries.

This comes after Libya’s House of Representatives and the High National Election Commission (HNEC) abruptly called off the presidential elections two days before its scheduled date on December 24.

“We take note of the High National Electoral Commission’s (HNEC) statement of 22 December on the postponement of the ballot scheduled on 24 December and its proposal for a new, early date on which to hold those elections,” reads the statement of the Western countries.

“We affirm that individuals or entities, inside or outside Libya, who obstruct, undermine, manipulate or falsify the electoral process and the political transition will be held accountable and may be designated by the United Nations sanctions committee in accordance with UNSC resolution 2571,” concludes the statement.