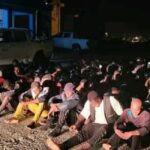 The Libyan Coast Guard said its naval patrols had intercepted 109 migrants who were on board a rubber boat that left Libya towards European shores.

“A patrol boat of the Libyan Coast Guard managed to rescue 109 migrants of several nationalities, who were on their way to European shores on a rubber boat,” the coast guard spokesman said in a statement.

“Once the rescue operation was completed, the migrants were disembarked at the landing station of the Tripoli Naval Base, and they were all transferred to the Department to Combat Illegal Migration (DCIM),” the spokesman added.

The DCIM, as part of its humanitarian role, will follow up the process of caring for these migrants and completing the procedures for their safe deportation to their countries,” the spokesman pointed out.

0 0
Previous : Erdogan: Thanks to the Turkish role, Libya has avoided a civil war
Next : 2171 new COVID cases in Libya and 22 deaths