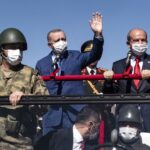 Erdogan: Thanks to the Turkish role, Libya has avoided a civil war

This came during a press conference on Wednesday, at the end of his two-day visit to Northern Cyprus, according to the Turkish Anadolu Agency.

“Turkey’s position on this issue from the beginning was to protect Libya’s sovereignty, territorial integrity, and political unity,” Erdogan said in response to a question about Turkey’s new policy on Libya and the Libyan elections in December.

“Thanks to our successes in the diplomatic and military sides in Libya, we have prevented the country from being dragged into a protracted civil war. In doing so, we paved the way for the UN-led political process,” he added.

Erdogan indicated that Turkey is closely following the Libyan developments, calling on other countries to sincerely exert their efforts.

0 0
Previous : Closing of Libyan universities due to COVID to continue until end of July
Next : Video: 109 migrants trying to reach European shores intercepted off Libya’s coast