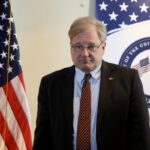 Special envoys from the US, France, Germany, Italy and the UK are due to meet in Washington on Friday, January 13, to discuss their next steps after Libya’s House of Representatives and High Council of State last week failed to reach a final agreement in Cairo on the constitutional basis for national elections.

This was reported by British newspaper The Guardian which also revealed that meeting is convened by the U.S. envoy and ambassador to Libya, Richard Norland.

According to The Guardian, the western diplomats will look at how to stage elections and whether to urge the new UN special envoy Abdoulaye Bathily to set a deadline for establishing a national Libyan body to agree on elections.

An unnamed western diplomatic source told the British newspaper that western leaders are losing patience with the entrenched Libyan political elite as they have “collectively failed to agree on the basis of elections”.

“They are some making sincere efforts at mediation, but the abiding character of too many Libyan politicians on both sides of the divide is [to] pay lip service to the necessity of elections and then do everything possible to throttle them so they can continue lining their pockets,” the diplomatic source said.

“We may have to stop hoping we can persuade these people to agree to elections and instead find a way to work around them.”