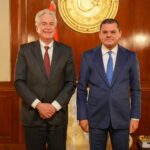 The director of the U.S. Central Intelligence Agency (CIA), William Burns, made a surprise visit to Libya today, where he met with Libyan Prime Minister Abdul Hamid Dbeibeh in Tripoli.

According to a statement by Dbeibeh’s media office, Burns “stressed the need to develop economic and security cooperation between the two countries, praising the state of stability and growth witnessed by Libya during the recent period.”

“For his part, the Prime Minister emphasized that the goal is to stabilize our country and support it internationally in order to reach the elections,” reads the statement from the premier’s office.

Libyan Foreign Minister Najla Mangoush, intelligence chief Hussein Al-Aeb, and the Minister of State for Cabinet Affairs Adel Gomaa were also present in the meeting, as reported by Dbeibeh’s office.

The statement by the premier’s office is the first official response from the Libyan and American sides on Burns’ visit. It is noteworthy that, while in Libya today, Burns have also met in Benghazi with Khalifa Haftar, General Commander of the Libyan National Army (LNA), sources told The Libya Update.

The LNA and the CIA are yet to comment on Burns’ visit.