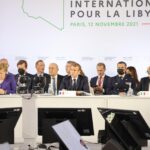 World powers will push for sanctions against anyone who disrupts Libya’s political transition, their leaders agreed at a Paris conference on Friday aimed at ensuring the country sticks to a plan to hold elections in December.

The meeting, which included the leaders of France, Libya, Germany, Italy and Egypt, as well as the U.S. vice president, was to cement backing for the planned Dec. 24 election and efforts to remove foreign forces.

Leaders in Paris decided “that individuals or entities, inside or outside of Libya, who might attempt to obstruct, undermine, manipulate or falsify the electoral process and the political transition” could face sanctions.

UN Secretary-General Antonio Guterres in a video message to the conference warned that “any party that deliberately undermines or sabotages peace must be held accountable”.

Italian Prime Minister Mario Draghi said it was essential a new election law was drawn up “with the agreement of everyone… not in the coming weeks, but in the coming days”.

Libya’s interim Prime Minister Abdulhamid al-Dbeibah said he had emphasised urgent changes during the meeting to the electoral rules that rival Libyan political bodies are tussling over.

The foreign powers want what they call an inclusive election – likely meaning one that would allow all potential candidates to run.

0 0
Previous : Marina Sereni: Paris conference on Libya to be held under Italian, German, French presidency
Next : Turkey has reservations about troops withdrawal from Libya, says Merkel