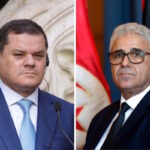 Mayors of al-Zawiya municipalities west of Tripoli announced their absolute support for the new National Stability Government, headed by Fathi Bashagha, which was granted confidence by the House of Representatives (HoR) on Tuesday.

The mayors of the municipalities demanded in a statement the outgoing Prime Minister, Abdel Hamid Dbeibeh, to abide by the principle of peaceful transfer of power, hand over duties to the new government, and not drag the country into the scourge of divide and war.

The statement, which came under the signatures of the mayors of the municipalities of al-Zawiya, Southern al-Zawiya, and Western al-Zawiya, explained that this comes in accordance with the provisions of Sharia and the teachings of Islam, which instructed us to arbitrate the mind, renounce disagreement, and unite the word.