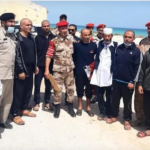 15 detainees released in exchange between LNA and armed groups

The Libyan 5+5 Joint Military Committee (JMC) supervised on Sunday a new operation to release and exchange detainees between the Libyan National Army (LNA) and the armed groups in the Western region, in implementation of the ceasefire agreement signed between the two sides of the conflict in Geneva in October last year.

The operation took place in coordination with the Committee of Prisoners and Missing Persons in the Central Region and in the presence of dignitaries and wise men from the cities of Misurata and Gharyan, in addition to the Libyan Red Crescent, during which seven detainees of LNA and eight detainees of the armed groups were released.

In this context, the Director of LNA Moral Guidance Department, Major General Khaled al-Mahjoub, confirmed in press statements that the exchange of the remaining prisoners who are still detained will continue in the coming days and weeks, after the success of JMC efforts to contain this file.

This is the third deal to release detainees who were arrested during the military operation launched by LNA against the armed groups to control Tripoli, after the success of talks between JMC members to resolve this issue.