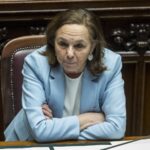 Tensions might resume in Libya if the upcoming elections on December 24 were to be postponed, said Italian Interior Minister Luciana Lamorgese in a speech at the Ambrosetti Forum on Sunday.

“We must not forget the instability of Libya: a postponement of the elections could represent the resumption of tensions,” she told the audience at the event, which is taking place in the Italian town of Cernobbio.

“The prospects for Tunisia are also worrying and there is the risk of a complete collapse”, she added.

The Italian minister called for a “great economic plan that must concern the North African countries”.

“The increase in arrivals of migrants is the result of the pandemic crisis that has hit African countries with violence. A boost that has also grown due to the socio-economic depression that has affected countries such as Libya and Tunisia,” Lamorgese said.