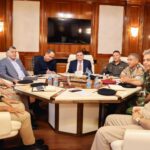 Prime Minister Abdel Hamid Dbeibeh authorized on Saturday the establishment of a fact-finding committee to investigate the armed clashes, which took place in Tripoli on late Thursday night.

Dbeibeh met with a number of military officials based in western Libya to discuss the incident, which he described as “unacceptable”, according to a government statement.

The Libyan premier vouched to hold the culprits accountable, and stated that the committee will deliver its findings within a week.