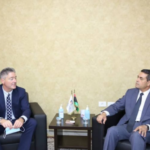 Head of the Libyan High National Elections Commission (HNEC), Imad al-Sayeh, discussed in a meeting in Tripoli with the German ambassador to Libya, Michael Ohnmacht, the latest developments of the electoral process in accordance with the developments of the Libyan political situation and the expected progress in establishing the constitutional base.

Ohnmacht stressed, during the meeting held at HNEC headquarters, his country’s government support for the elections in Libya, expressing its readiness to cooperate with the Commission to make it a success, as this represents a reflection on the peace and stability map for the region, according to HNEC.

The German Ambassador praised at the same time the efforts made by the Commission in registering voters at home and abroad, HNEC said in a statement on Sunday.