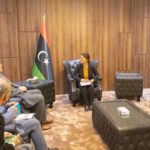 Libyan Foreign Minister, Najla Mangoush, discussed with the Head of the United Nations Support Mission in Libya (UNSMIL), Jan Kubis, the latest developments of the Libyan situation, and efforts to end the crisis, leading to the upcoming elections.

This came during a meeting held at the Ministry headquarters in Tripoli, where the minister reviewed the outcomes of the consultative ministerial meeting of Libya’s neighboring countries, which Algeria recently hosted, according to the Ministry.

Kubis welcomed the statement issued at the conclusion of the ministerial meeting, and supported what it included, the Libyan Foreign Ministry said in a statement on Sunday.

“The meeting also discussed the encouraging results achieved by 5+5 Joint Military Committee (JMC) in light of the complete ceasefire, the reopening of the coastal road linking the eastern and western regions, and progress in the issue of detainees exchange,” it added.

It also touched on Libya Stability Initiative, and Libya’s endeavor to organize and chair an international conference early next month, as the first purely Libyan initiative aimed at developing practical mechanisms for implementing the outcomes of the Berlin Conferences I and II, leading to the upcoming elections scheduled for December 24 this year, the statement said.