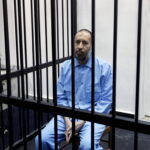 Saadi Gaddafi fled for Niger during the NATO-backed uprising, but was extradited to Libya in 2014 and has been imprisoned since then in Tripoli.

The former professional footballer had been held in a Tripoli prison, accused of crimes committed against protesters in 2011 and of the 2005 killing of Libyan football coach Bashir al-Rayani.

In April 2018, the court of appeal acquitted him of Rayani’s murder.

The 47-year-old flew to Turkey shortly after his release.