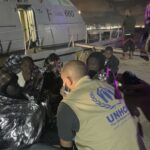 177 migrants survived Monday night after the Tripoli-based Libyan Coast Guard intercepted two boats which had set off from Zwara and Khoms the night before, the U.N. High Commissioner for Refugees (UNHCR) said.

The bodies of 15 people were recovered during the same operation, UNHCR said.

Those who survived were taken to Tripoli Naval Base, where they were provided with aid and humanitarian assistance by UNHCR.

Bodies of 15 persons recovered as 2 boats arrived at Tripoli Naval Base this evening. 177 survivors were provided aid, some in need of urgent medical help by UNHCR and partner, @RESCUEorg