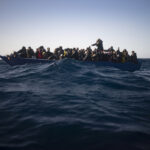 34 migrants in ‘distress’ between Libya and Malta, says NGO

A boat with 34 people on board in Malta’s search and rescue zone is in need of immediate rescue, according to a humanitarian organisation.

Fifteen hours after the first alert from the NGO, the migrants spent Friday night out at sea waiting for help to arrive. They are still drifting and need to be rescued.

When contacted about the migrants’ plea for help, an AFM official said: “We have no information on the matter so far”.

Alarm Phone is an emergency hotline NGO which receives SOS messages from migrants crossing the Mediterranean and then relays them to the national authorities, depending on their exact location.

On Friday, the NGO first reported how 34 people were in distress off the coast of Libya, where the people on board were asking for help due to the strong wind and waves.

The NGO alerted the authorities for immediate rescue, as the boat was in danger of capsizing due to the harsh weather conditions.

Following the first update, the NGO said the migrants survived the night in Malta’s search and rescue zone.

In its latest update today, Alarm Phone said that the migrants are still at sea “after 36+ hours since we first alerted EU authorities”.

We continue to receive many solidarity messages demanding their rescue to a place of safety,” the NGO said. “For 36 hours, only civil actors & merchant crews are trying to save lives.”

After 36+ hours since we first alerted EU authorities, the ~34 people are still at sea, beside the #BerlinExpress. We continue to receive many solidarity messages demanding their rescue to a place of safety. For 36h, only civil actors & merchant crews are trying to save lives. pic.twitter.com/HuBFznm9yU