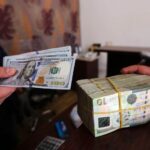 Five officers, working at the Misurata port costumes, have been arrested over the embezzlement of 25 million Libyan Dinars ($5 million), announced the Public Prosecution Office of the Attorney General in a statement on Saturday.

The Public Prosecution said it launched an investigation into incident and was able to retrieve 7 million Libyan Dinars. It also said it is investigating the involvement of other perpetrators.