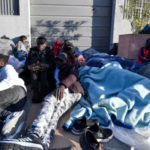 50 migrants, including children, rescued in Niger desert near Libya – UN

A total of 50 West African migrants, including women and children, were rescued in the desert in northern Niger near the Libyan border, the United Nations said Tuesday.

The International Organization for Migration (IOM) said the migrants were “vulnerable and in distress” and comprised 10 children, three women and 37 men, AFP reported.

IOM said they became “stranded” in the desert near the town of Dirkou after a perilous journey.

“Most were returning from Libya. Some were on their way to Libya but no longer had the means to continue their journey, and asked for our help,” IOM spokeswoman Aissatou Sy told AFP.

Dirkou is a crossroads for the smuggling of migrants, weapons and drugs into Libya and on to Europe.

The group, including 49 Nigerians and one Cameroonian national, was rescued last week and flown to the transit city of Agadez, where the IOM runs a reception centre.

The authorities in Agadez say it is common for vehicles transporting migrants to break down in the desert, or even for smugglers to lose their way or abandon passengers for fear of being caught.

Abandoned, some migrants die of dehydration, they say.