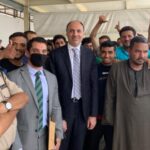 CAIRO – 90 Egyptians who have been locked in the illegal migration center in Tripoli have been freed, announced Egypt’s ambassador to Libya on Monday

The Egyptian citizens, who are all from Al Qayat village located in Minya governorate in Upper Egypt, have been held in detention since June 18.

Ambassador Mohamed Tharwat Selim noted that the freeing of the 90 individuals is the outcome of coordination between the embassy, which resumed operation in May, and Libyan authorities.

0 0
Previous : Only military committee can decide reopening of coastal road, says LNA commander
Next : Nigeria’s president: Mercenaries in Libya must be disarmed ahead of withdrawal