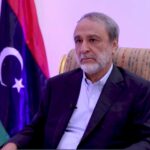 Abdulrahman Sewehli, former chairman of the High Council of State, said he will not acknowledge the government of Prime Minister-designate Fathi Bashagha, as he would continue support for Bashagha’s predecessor Abdul Hamid Dbeibeh.

In a statement via Twitter, Sewehli claimed that the House of Representatives’ vote of confidence for Bashagha’s government was “fraud” and “scandalous”.

“Everything that was issued by Aguila’s parliament regarding the Haftar-Bashagha deal is null and contrary to the constitutional declaration and the political agreement,” he added.

0 0
Previous : Bashagha’s cabinet to perform oath of office before parliament on Thursday
Next : Dbeibeh: June elections will remove current parties from political scene