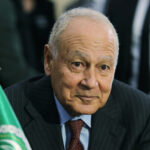 The Arab League said its Secretary-General, Ahmed Aboul Gheit, will start a visit to Tunisia and Libya Tuesday to participate in meetings held in the two countries.

Aboul Gheit is scheduled to visit Libya on October 21 to participate in a ministerial meeting in Tripoli, the first that Libya hosts in years on the Libya Stability Initiative, which was called for by the Libyan Government of National Unity (GNU), said official source of the League’s General Secretariat.

Aboul Gheit is scheduled to arrive in Tunisia first to participate in the opening of the 21st session of the Arab Radio and Television Festival, which is scheduled to be held in Tunisia under the slogan “Festival of Communication and Renewal,” which is organized by the Arab States Broadcasting Union (ASBU), according to the source.