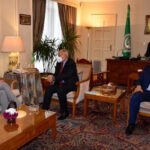 The Secretary-General of the Arab League, Ahmed Aboul Gheit, held a meeting with the UN Special Adviser on Libya, Stephanie Williams, in order to discuss the latest developments in Libya.

The meeting, held Sunday in Cairo, witnessed a consensus on the importance of holding the Libyan elections, in addition to continuing consultations in the three military, security and economic tracks in the manner in which they were before announcing the postponement of the elections, which were scheduled for December 24 last year.

Aboul Gheit stressed the continuation of consultation and coordination on Libya in order to reach elected institutions.

He stressed the need to encourage institutions to assume their responsibilities towards the Libyans at this stage, which he described as important and critical.

0 0
Previous : NOC Chair calls on Audit Bureau not to address oil companies on control over contracts
Next : UN Envoy to Libya to arrive in Moscow today, reports