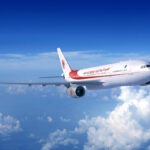 Algerian Transport Minister, Issa Bakay, discussed with Algerian ambassador to Libya, Kamal Hijazy, the return of Air Algerie’s activity between Algiers and Tripoli, as well as the opening of a maritime line between Algeria and Tripoli as soon as possible.

The meeting of the minister and the ambassador came as an embodiment of the directives of the Algerian President, Abdelmadjid Tebboune, after the recent visit of the President of the Libyan Presidential Council, Mohamed al-Menfi, to Algeria, Algerian newspaper An-Nahar quoted Transport Ministry.