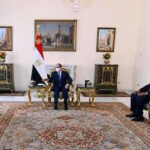 The two sides stressed the need to support the current efforts to achieve security and stability and preserve the unity and sovereignty of Libya, through the implementation of the relevant UN and international resolutions in terms of holding elections on time without delay, during the month of next December, and the exit of all forces and mercenaries from Libya.

The meeting, which was held in Cairo, touched upon the developments of a number of regional issues of common interest, especially the situation in Libya, according to the Spokesman of the Egyptian Presidency.

0 0
Previous : Di Maio in Libya tomorrow for meetings in Tripoli and Benghazi, report
Next : Air Algerie to resume flights to Libya