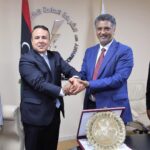 TRIPOLI – Algeria launches a project to export electricity to Libya and to connect the Algerian electricity grid to the Libyan one.

The announcement was made during a Thursday visit by Chahir Boulekhras, the general manager of Algeria’s state-owned electricity company Sonelgaz, to Libya, where he, and his accompanying delegation, met with officials of Libya’s General Electricity Company.

According to a statement from Sonelgaz, Boulekhras hailed the creation of a direct electricity connection between Algeria and Libya as a “historic decision”, adding that his company is willing to share its expertise and resources in the energy sector with its neighboring counterpart.