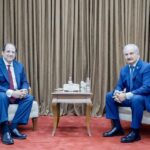 BENGHAZI – Egypt’s chief of intelligence, Abbas Kamel, has underscored the “important role” of the Libyan National Army (LNA) in securing the national elections in December.

Speaking on Thursday during a meeting with LNA’s General Commander Field Marshal Khalifa Haftar, Kamel emphasized that “Egypt values the Libyan army’s efforts and sacrifices during on its war on terror”.

For his part, Haftar expressed his appreciation for the Egypt’s role in Libya’s stability.